As some of you may know, Karmr is a social network for actions. It works a lot like other social networks except that, in the same way as Instagram and Vine chose to focus on a specific media type, we chose to focus on a topic type – things that people did. There is an implicit leaning towards good deeds but I see Karmr as for anything active and worth sharing so things like playing with your kids, losing weight, passing exams, helping the new guy at work, inventing things, going in to space and so on are all perfectly fine. 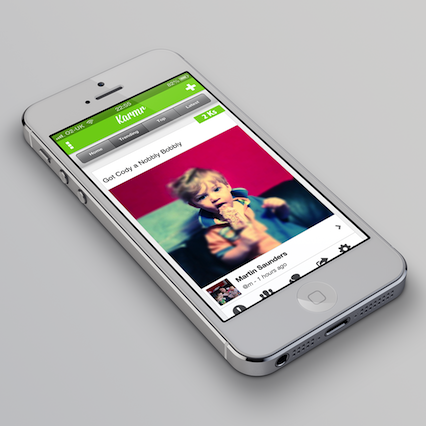 For people who are not yet Karmr users all posts on Karmr have a score that comes from other people giving it Karmr points. Each Karmr user in turn has a Karmr score that is the sum of all their action scores plus any bonuses we choose to give them (e.g. for making their first post, referring friends etc).

Now, when you log in to Karmr the first screen you will see is your Home Feed. This is a bit like your Facebook wall or Twitter timeline and shows all of your actions, all the actions of people you gave Karmr to and any actions they in turn gave Karmr to. Effectively giving Karmr is equivalent to Liking, Following and Retweeting all at the same tine. This process enables Karmr users to build a rich and relevant Home Feed in a fairly minimal way.

In addition to the Home Feed, you can browse Trending (most recent Karmr), Latest and Top actions and the equivalent for other Karmr users. At some point fairly soon there will be a search capability but we aren’t there yet (we launched Jan 2013).

Anyway, that’s introductions done except to say that you can get the app here and see Karmr online here (skipping to the actions here).

So, it’s early days for Karmr really and we are trying to work our way through to something with Product-Market fit in a fairly lean way. Karmr is totally bootstrapped so for one thing we need to get as much bang for our buck as possible and for another we don’t have many bucks! That means that we must avoid wasted time (and cost) as much as possible so treating development as a series of experiments is a pretty effective way to avoid long dark blind alleys. There is a problem though – we have a million things we want to do and we need to structure this as much as possible to make sure we do the right experiments. Enter “metrics”.

Metrics are the things we measure. They are the cold hard numerical facts that let us quantify what the heck is going on. But, what do you measure. For a startup a great, and now pretty popular scheme (a hedge fund guy quoted it to me verbatim recently) comes from Dave McClure of 500 Startups. This idea is called “Startup Metrics for Pirates”.

Are the five key metrics.

After getting the first iOS release out in early January (after 5 days hard coding), making a simple web version and then submitting a bug-fix iOS version or two I started trying to work out what was going right and what was going wrong. After about 6 weeks on the App Store and no marketing we had about 500 downloads, about 250 registrations (all from the app, none from the web) and a little over 100 actions (largely featuring my kids). Plus we had a handful of regularly returning users.

What does this tell us? Well, first of all I am frankly amazed at 500 downloads in 6 weeks given I did nothing at all in promotion. The fact that quite a decent number of people downloaded the app hopefully means that the core idea is supported by people so it is worth continuing in the first place.  That 50% go through to register could be better but is ok with a fairly minimal app launch screen. It’s the actions per user that sucks really. Basically most people don’t post anything. Actually, once the first post is made a few more usually follow with 1 post rarely featuring.

Apart from being a little depressing this stuff is great to know as seeing where the dropouts happen means we can do something about it. So, what to do?

I decided that to move things on I needed to sort out the early steps first – the AA part; acquisition and activation. Really, unless I have people signing up and posting efficiently the rest is pretty irrelevant. The problem is that there are really three steps in my process, not two – download (or visiting the web site), registration and posting the first action. I put together a matrix of metric vs channel to try and work out the options and because I like pirates I stuck with the theme adding “Awareness” at the front of the set of metrics.

Awareness (downloads / uniques)
Acquisition (registration)
Activation (Added a post – I’m planning to create an on-boarding process that will offer a bonus Karmr point for the first post)
Retention (Number of active users out if total)
Referral (It’s a bit early but tracking social posts via Social Crawlytics and I will add a friend invite system ASAP)
Revenue (£0.00 for now but hopefully one day that will change)

A slightly extended set, for a fat pirate if you like (Aaarrr) but because I altered the basic set according to my system I have something far more appropriate. And that’s the lesson really – learn and follow best practice, just don’t do it blindly.