This was my PhD project which took me three years to complete and almost as long to write up! The gist of the project was to take the HyperSense instrument made by Oxford Instruments and improve the hit-rate of the experiments. I found some interesting stuff out in the course of this which became my my thesis.

The HyperSense instrument takes a small (~50µl) sample in a glassing solvent mixture with a stable radical doping agent to enable DNP to occur. This sample is inserted into the instrument cryostat which cools the sample mixture to ~1K and then irradiates with microwaves to induce the DNP. After the allotted time period the sample is dissolved by shooting hot pressurised solvent (water or methanol) at ~10BarG into the sample cup and transferring along a transfer line to a standard liquid state NMR spectrometer magnet. A single scan NMR experiment can then be performed to see what is going on in the sample. This was based on the work of Golman et al.

The problem I had to deal with was that while some samples like pyruvate and urea polarised amazingly well, most others really didn’t. I started by looking at whether the polarisation stored in slowly relaxing spins could be transfered to the more rapidly relaxing spins by using an NOE pulse sequence in the liquid state spectrometer. This worked pretty nicely with isotopically enriched 4-methoxyphenyl 13C-acetate (made with my own synthesis method) and some of the work was published. 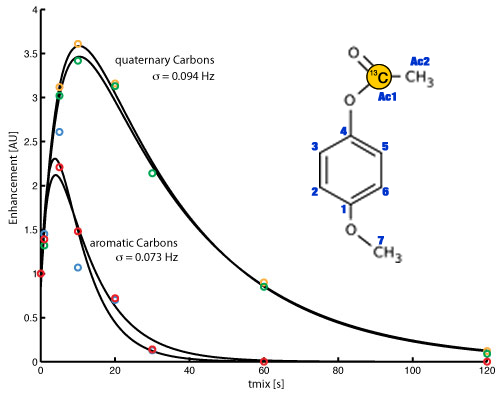 The results I had with the NOE work led me to wonder if the concept of enriching a sample with a number of slowly relaxing 13C spins would lead to a similar effect in the solid state. It turned out that it did although not by an NOE (as this would be impossible with no motion). I introduced 13C-2-acetone into a number of samples and in particular citrate showed a very strong increase in the amount of hyperpolarisation seen. In DNP the majority of polarisation events are second hand where the polarisation spin-diffuses through the sample radiating out from the initial paramagnetically polarised nuclei. By increasing the number of 13C spins where the average internuclear distance was too great the spin diffusion was able to transmit polarisation though the sample once more leading to recovery of the DNP effect. The concept of a co-polarisation agent won an international patent (no WO 2008/149118 A1) and some of the work was published.

Over the course of the experiments I have described above I noticed one trend that consistently appeared where the DNP result was especially poor. This was that the peaks for the solvents in the matrix (methanol for example) were upside-down – that is they had a negative amplitude. This really irked me as there was no reason so far as I could see why this should happen. I ruled out artefacts by reducing volumes etc and started to notice negative signals on other proton-bound carbon spins. As the strongest effect seemed to be on methyl carbon residues I wildly speculated that some energy was somehow leaking from the rotational system of the methyl group into the nuclear Zeeman system. I was politely mocked by the people I spoke with about this idea while at ENC but when I returned I decided to put it to the test. So, I put pure acetone in a sample cup and placed this into the polariser with the microwave source turned off. After 90 minutes I dissolved and acquired and low and behold was a negative signal. I tried some other substances and the effect held.

So, what the hell was going on? Well, it turns out that my wild speculation wasn’t actually that far wrong. There is a whole body of work currently fronted by Prof Horsewill of Nottingham University looking at how quantum rotors behave at low temperatures. Crucially a paper by Clough, Horsewill and Palley describe a DNP like experiment where a magnetic field sweep brought about a level-crossing phenomenon between the rotational tunneling system and a radical electron. For me the radical was not relevant but I think that it is the same process but happening VERY slowly where the T1’s are long enough at my temperatures to allow the polarisation to accumulate.

I spent a fairly immense amount of time trying to understand the physics behind all of this and got a fair way. I want backwards and forwards on describing the effect as a Haupt effect or not as there is a similar Dipolar effect that Haupt reported. I finally decided that this is not the dipolar Haupt effect. But, I think the mechanism is the same and there is a vague reference to the idea that an effect like this could occur in one Haupt paper so I now describe this as a Haupt-like affect (it just seems fair to the guy that really found the idea first). This work was published with me as first author in a JACS letter and in a PNAS article. I also gave a talk at ENC (to about 1000 physicists) which was probably the proudest (and scariest) moment of my academic career.

At then end of my project I tried to bring it all together so I did a bunch of experiments that used my findings to demonstrate how the methods could be improved. I thought this gave a nice roundedness to things. The other thing I did in the course of my project was create a sample delivery device that worked more effectively with aqueous sample. This ended up being recreated by Oxford Instruments as a commercially available device. 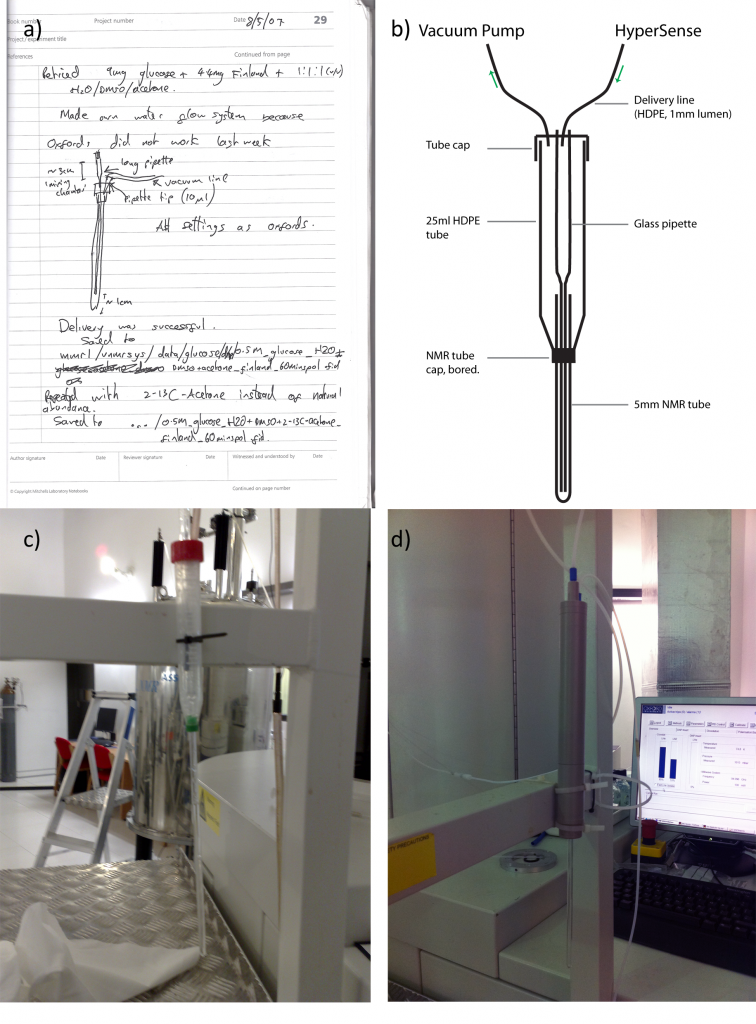 If you want to know more look at my full thesis HERE.